Nissan’s Z cars have always promised performance on a budget, but arguably none in the previous six generations have delivered that quite so convincingly as the 2023 Nissan Z Coupe. Even if the starting price isn’t quite the automaker’s well-publicized “less than $40,000” when you take into account the inevitable destination fees, you’re still paying a surprisingly small amount for a V6 engine with 400 horsepower to play with.

Indeed, take a glance across Nissan’s competition, and it’s difficult to find quite the same combination of horses per buck. Two-seaters with north of 300 horsepower aren’t in entirely short supply, but rivals like Toyota’s Supra 3.0 will ask for $52k+ in return. 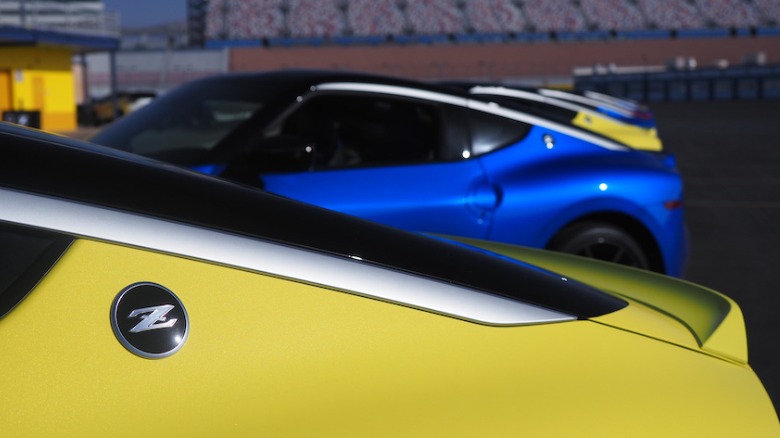 Nissan’s strategy to achieve that, of course, is a well-argued one. The seventh-generation Z builds atop the developments of its 370Z predecessor rather than reinventing the coupe altogether, an approach that has led to skepticism from some quarters as to just how “new” this new Z actually is. The reality, as I discovered on the road and on the track, is that heritage is complicated.

Outside, the proportions — a long, low nose, cabin pushed well back, and a smoothly sweeping rear with a short deck — are certainly reminiscent of the last-gen Z, but then again, they’re also a nod back to the original coupe, too. It’s Nissan’s detailing that works most effectively here, a careful balance of retro-futuristic that’s far more compelling in person than it is in photos. It also helps if you’re even vaguely familiar with early Z cars. 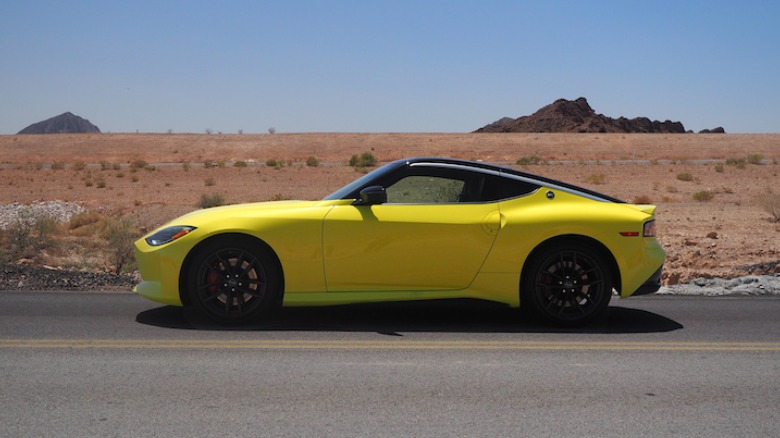 The sizable rectangular grille, for instance, is a functional necessity for cooling, but it also shares its shape — if not its scale — with some of the very first Z coupes. The eye-esque front lights are a nod to the way the lens covers on the older Zs would glow with internal reflections, while the rear clusters with their glowing double-slash prisms bring the 300ZX’s tail neatly up to date. 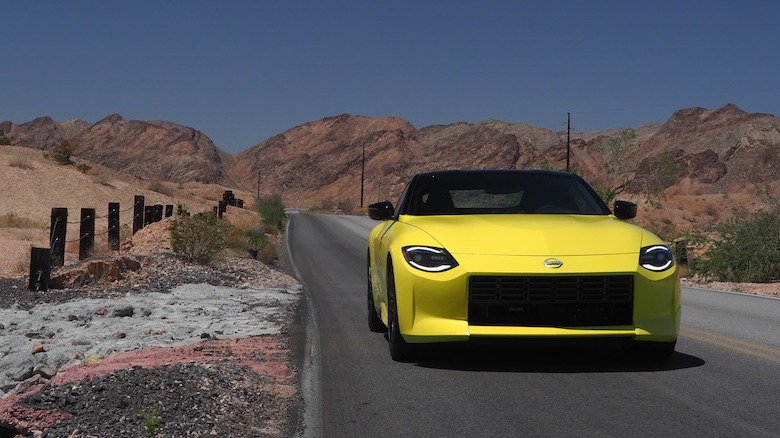 It looks crisper and sharper than the 370Z (and, for that matter, than the 350Z before it), though it loses none of the instant recognition factor.

The reality, Nissan says, is that 80% of the 2023 Z is new or changed compared to the 370Z. It will also readily concede that some of those changes are on the small side. In the end — so the official argument goes — it makes little sense to throw away existing developments that still make fundamental sense, especially if you’re targeting a more competitive price tag with the final car. 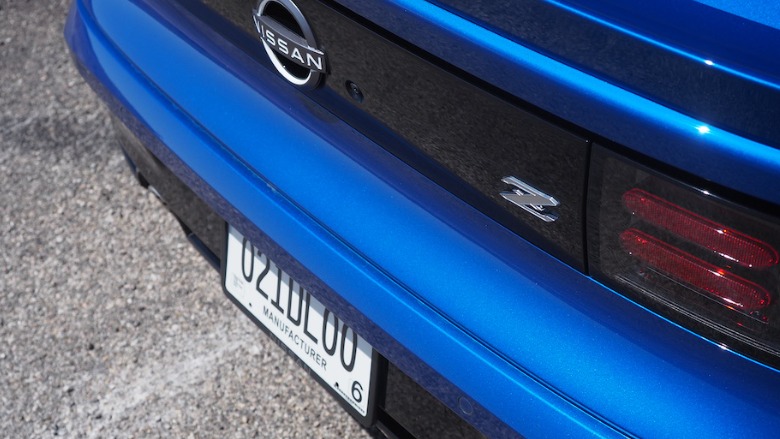 With that in mind, the 2023 Z tweaks, refines, tightens, and polishes, even if it falls short of complete reinvention. The biggest change is the 3.0-liter twin-turbo V6, replacing the old, naturally-aspirated 6-cylinder in the 370Z. It’s borrowed from Infiniti’s Red Sport cars, though modified for Z purposes, but the headline improvement is in just how much power you get.

There’s now 400 horsepower and 350 lb-ft of torque, increases of 68 horsepower and 80 lb-ft, respectively, on the old car. The Z team added a new recirculation valve for quicker throttle response and a speed sensor to the turbocharger that allows it to spool up faster and stay there for more of the time. Launch control is also offered for the first time in the Z series, and a new rear clutch-type limited-slip differential for greater traction.

The 6-speed manual is still alive and kicking

Keeping purists particularly happy are the transmission options. There’s a new, 9-speed automatic — with two more gears than the outgoing 370Z — that’s faster, smoother, and more responsive than before. It has paddles on the steering wheel for manual override.

However, for no extra cost, there’s also an updated version of the 6-speed manual. Nissan promises a smoother gearbox than before and one that feels more precise in its shifts. The model can also be had with SynchroRev Match and a no-lift-shift system that allows you to keep the gas pedal planted even as you change gears. Stick-shift enthusiast cars are increasingly a rarity, and you have to give credit to Nissan for not taking the simple route and going automatic-only. It’s a solid manual gearbox, and I think long-time Z fans will be happy, though it’s not my favorite. 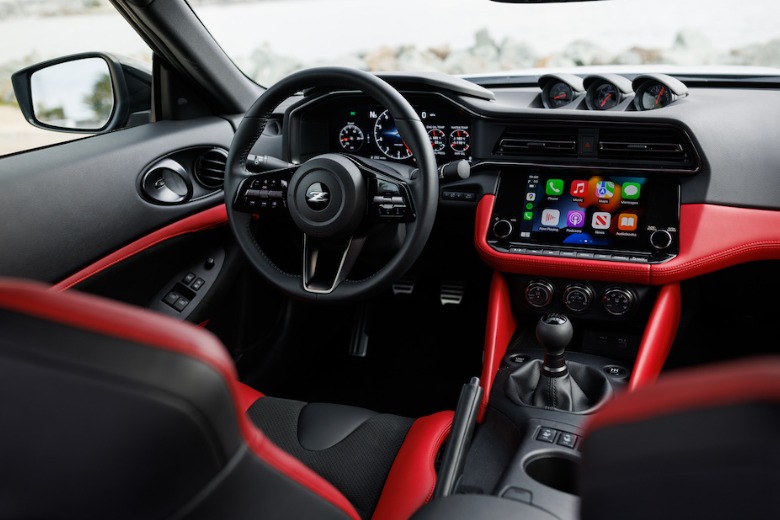 Compared to, say, Mazda’s beautifully-weighted transmission, the Z’s stick still feels a little lumpy. It likes to be muscled through the ratios rather than slipping with seductive ease, and smooth clutch modulation takes some practice. Personally, I’d go for Nissan’s automatic. It’s not quite as slick a shifter as the 9-speed ZF transmission that many of the Z’s rivals use, but it’s fast and responsive nonetheless. For day-to-day driving, it’s smooth and unobtrusive, but it’ll wake up in sport mode when required. If you’re really pushing hard, then reaching for the paddles makes the most sense — there were times when the automatic Z was a little slower to downshift than I would’ve preferred, but it’s no dealbreaker.

Whichever you pick, the Z is definitely fast. Nissan prefers not to talk exact 0-60 mph times, though something in the ballpark of 3.5 seconds is the general estimate. There’s the slightest of pauses before the twin-turbos get into the swing of things, but then peak torque arrives from just 1,600 rpm.

That pays dividends on the track and out on the road. For the former, the new Z is eager and tractable, the new electronic power steering stiff but communicative. Nissan has switched to a mono-tube suspension system with increased spring rates and geometry changes, too. Without going back-to-back with a 370Z, it’s tough to quantify the exact improvements, but it definitely feels predictable and stable, even when jinking around tight hairpins. 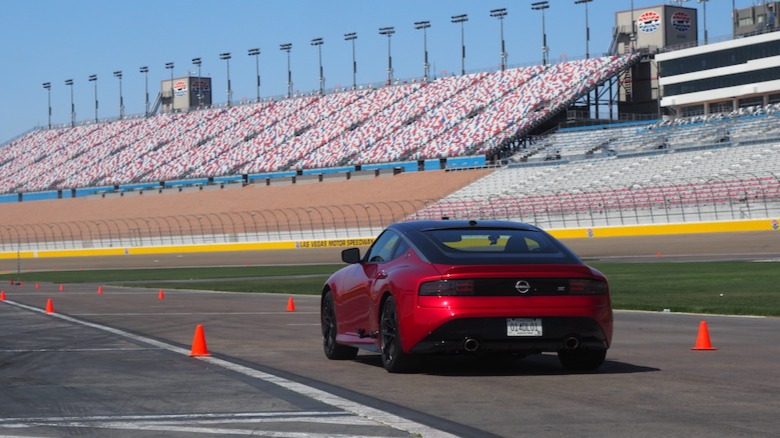 Beyond the track, the Z feels playful. Nicely weighted and balanced in long, sweeping turns, then precise in swifter corners. Given the focus of the suspension tune, it’s no great surprise that poor-quality road surfaces make their imperfections known in the cabin, but a stiffer, more rigid chassis has ousted much of the flex that could strike in the old car. Nissan’s performance brakes grab nicely, and I actually preferred the standard pads to the optional Nismo versions that promise more robustness on the track.

Inside is where the Z shows its age

Evolution, rather than revolution, then, and that goes for the cabin too. It’s perhaps where the 370Z felt most dated, even if — though not a complete reinvention — the 2023 Z improves things in most areas.

There’s a new 12.3-inch digital instrument cluster, for instance, replacing the old analog gauges, and a new infotainment system available with an 8-inch or 9-inch touchscreen. Analog dials poke out of the dashboard top like a triple-eyed toad, just like in Z cars of yore, and there are easily-adjusted knobs for the HVAC system. You get blind spot warnings and rear cross-traffic alerts, adaptive cruise control, lane departure warnings, and automatic emergency braking with pedestrian detection and predictive front collision warnings, too. 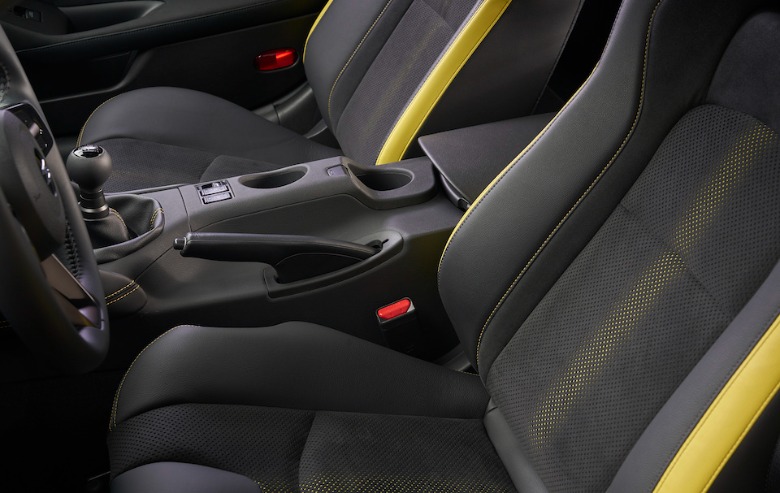 It definitely leaves the new Z feeling more competitive, even if there’s a fair amount of hard-feeling plastic and Nissan’s infotainment interface — particularly the navigation — feels generally dated and sometimes just plain frustrating. Existing Z owners upgrading will find the seat controls familiar; those new to the series will probably be left scratching their heads at the odd combination of knobs and switches spread around the seats.

New and most appreciated is the addition of a telescopic steering column. That addresses one of the 370Z’s most egregious ergonomic shortcomings, accommodating a far broader array of driver heights. There’s even a second cup holder now hidden under the sliding center armrest.

You could make the argument that the new cupholder, more than anything else, epitomizes the 2023 Nissan Z. It’s a clear response to the demands of existing Z zealots: one of a long list of small — but collectively meaningful — improvements, like the telescoping steering wheel and the launch control. Taken individually, bar perhaps the twin-turbo engine, they’re tweaks, but collectively they leave the new Z the most compelling across its 5+ decades.

I think you have to stick at the affordable end of the range in order for the new coupe to make the most sense. The 2023 Z Sport, at $39,990 (plus $1,025 destination), doesn’t sacrifice speed or safety tech; you still get Android Auto and Apple CarPlay on an 8-inch touchscreen, plus the choice of manual or automatic transmission.

The 2023 Z Coupe Performance, at $49,990 (plus destination), and the limited-run Z Proto Spec, at $52,990 (plus destination), start to feel a little rich for what you’re getting. At that point, the cabin underwhelms compared to rivals, even if you’re getting heated leather seats; the mechanical limited-slip rear differential is standard on Performance and up, as are Nissan Performance brakes, but the Bose audio sounds lackluster, and the interior plastics start to feel less forgivable.

In the end, though, I keep coming back to just what you’re getting from your $41k sports coupe. Four hundred horsepower is a frankly astonishing amount for the money, but more than that, it’s usable and generally just plain good fun, too. Whether from frugality or old-school focus, or most probably some mixture of the two, Nissan has eschewed undue electronics and complexity. The result is a car that celebrates rather than hides its mechanical nature.

That feels about as retro as a theme as the 2023 Z’s exterior styling is. I don’t doubt that Nissan could make an entirely new Z car if it chose to, embracing everything from hybridization to adaptive suspension, but I also don’t think that would be a proper Z. Not least because any hope of attainable pricing would go right out of the window. 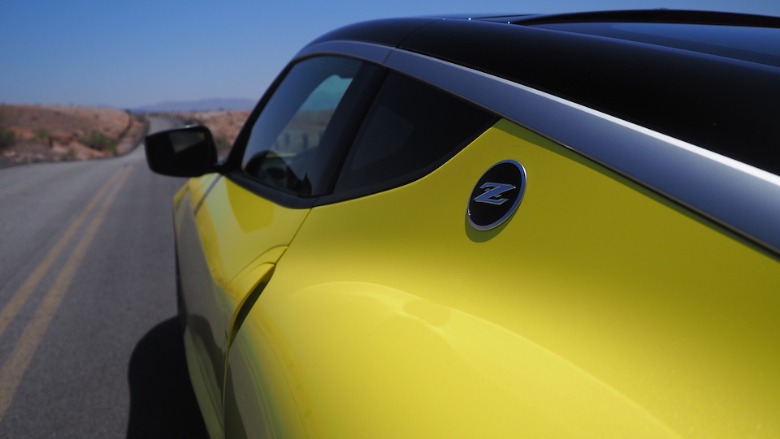 I like the 2023 Z far more than I ever did the 370Z, and I think some of that is down to Nissan’s stubbornness. Its commitment to offering a proper driver’s car within reach of the mass market and its near-obsessional insistence on squeezing every possible advantage from what it developed yesterday in the name of improving the model that comes tomorrow. Far from being the new Z’s dirty little secret, that willingness to borrow and improve is what makes the whole thing possible and so perversely charming with it. At a time when affordable enthusiast cars are in short supply, that’s something worth celebrating.