In his latest column, Mark Hughes explains how Lando Norris has taken another step in 2021, outshining team-mate Daniel Ricciardo and elevating McLaren; After the heartbreak of Russia, Norris is still looking for his first F1 win – but there are plenty of reasons for optimism

Daniel Ricciardo’s victory in Monza notwithstanding, McLaren’s cutting edge this season has been Lando Norris, who arrives in Istanbul fresh from the heartbreak of Sochi and the loss of what had been shaping up into his first grand prix victory, having already set his first career pole position the day before.

Norris has arguably added himself to an exclusive list of drivers whose personal performance has significantly lifted the position of their teams. It can be said with a certain degree of confidence, for example, that the McLaren should not have been within half-a-tenth of the Red Bull in qualifying for the Austrian Grand Prix, challenging Max Verstappen for pole there. Yet, that’s where Norris put it, one of just many stand-out performances from him this season.

Decoupling driver performance from that of the car is an impossible thing to do definitively. They are in reality intertwined. But we can get an order of magnitude estimation from team-mate comparisons and how any differences in team-mates compares to differences between cars.

As an example, if we take the average qualifying performance of each team’s faster car in qualifying (taking out the two wet sessions of Spa and Sochi, which skew the numbers because of the vast variability of track conditions from one moment to the next), we get the following average lap time for the season to date.

If we then look at the differences in average qualifying time for each team’s two drivers, we can see that in some cases there is a bigger gap than between two different cars. The difference in qualifying speed between Max Verstappen and Sergio Perez, for example, at 0.404s is way bigger than the tiny difference (0.001s) between Red Bull and Mercedes. If we added the Perez deficit to the Red Bull’s time it would drop a position in the car speed league table and would only just clear McLaren.

It’s a similar story at McLaren. Norris’ average of 0.191s advantage over Ricciardo if added to McLaren’s average time would drop the team three places in that much more tightly-packed part of the grid, behind both Ferrari and AlphaTauri.

In each case, how much of this is the faster driver’s brilliance and how much the extent of the second driver’s struggle is of course open to debate. But the subjective impression that Norris is consistently maximising the McLaren is certainly leant credence by these numbers. 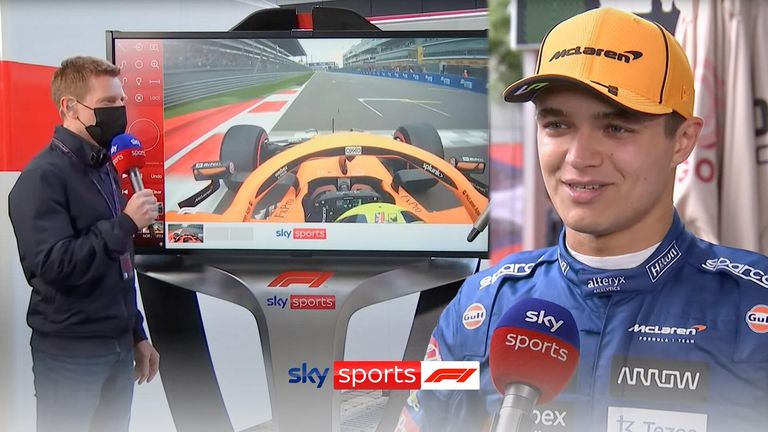 Please use Chrome browser for a more accessible video player

Lando Norris joins Anthony Davidson at the SkyPad to analyse his sensational qualifying lap which secured the first pole of his Formula One career.

Lando Norris joins Anthony Davidson at the SkyPad to analyse his sensational qualifying lap which secured the first pole of his Formula One career.

His raw speed is being accessed more consistently than in his first two seasons. His racecraft, where he places his car in battle, has generally been faultless this year and has drawn repeated praise from Lewis Hamilton. His sense of when the fight with Hamilton’s faster car at both Imola and the Red Bull Ring was beginning to cost time and of no benefit to his finishing position was perfect. He made Hamilton work for it, but without using up valuable rubber and other resources in a pointless defence once Hamilton was close enough. His defence at Sochi before the rain came, when the win was at stake, looked to have been enough to have secured the place, Hamilton later saying he didn’t believe he’d have found a way past.

His confidence in making the calls of set up with his race engineer has taken a big step. All that and the resounding turn of speed in both technical slow corners and big commitment fast ones suggest he’s ready to fight for world titles in the right car.

Please use Chrome browser for a more accessible video player

Lando Norris’ race fell apart in the final stages after a late downpour resulted in the McLaren driver spinning off the track and losing the lead.

Lando Norris’ race fell apart in the final stages after a late downpour resulted in the McLaren driver spinning off the track and losing the lead.

But in those last few laps of weather uncertainty at Sochi were perhaps the last few lessons to be learned. His understandable emotion as the momentous occasion of his first victory threatened to get away from him probably played its part in the sequence of race-losing decisions made between him and his race engineer.

Some time for reflection since then has surely made him yet-more formidable. Even though he’s yet to take that first victory, he’s surely going to take many of them in the future and it’s not unfeasible that the first of them may yet be in what remains of this season.